As 2016 is now well underway, let’s catch up on what transpired in the Big Bear real estate market last year and what that tells us about what to expect for 2016.

The real estate market in Big Bear fared well in 2015. We saw a surge in demand as, aside from January and October, every month of 2015 saw more residential closed sales than the same month a year prior.

In total 1,197 homes sold in 2015 which equates to a very encouraging 12.4% increase from the 2014 total of 1,065.  This increase in sales was distributed throughout the different price ranges and different areas of the Big Bear Valley. 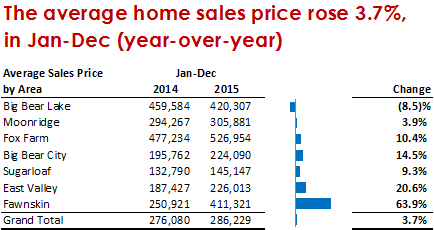 Prices improved in 2015 as well. The average sales price of all residential properties sold in 2015 compared to 2014 improved by 3.7% (from $276,080 in 2014 to $286,229 in 2015).  This somewhat modest appreciation was to be somewhat expected, as 2014 was the exact opposite. If you recall, in 2014 (as compared to 2013) we saw a solid 9.8% increase in average price but the number of sales decreased by 13.7% in total. So it would have been too optimistic, in my mind, to think we could post a double digit improvement in average price two years in a row. The goods news overall, is seeing such a substantial boost in sales, as typically when the numbers of sales trends up over a sustained period of time, prices soon follow.

Mammoth Mountain’s purchase of our two local ski resorts has brought an extraordinary number of visitors to Big Bear so far this winter. The big snow in December and January certainly helped as well.  With this tremendous escalation in visitors, it is only a matter of time before curiosity about the real estate here in Big Bear translates into a rise in sales.  I expect the Big Bear real estate market, especially the high-end market, to realize a benefit from this increased traffic in 2016. 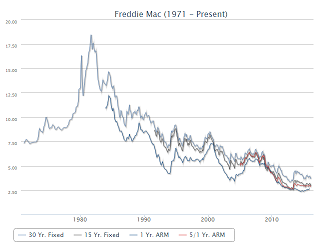 Another interesting development in the real estate market in 2015 is that the Federal Reserve finally raised short term interest rates. This much anticipated move, interestingly enough — and largely due to the overall weakness in the global economy and global unrest — actually led to a decrease in long term rates, including the 30-year mortgage rate. It is however, only a matter of time until mortgage rates increase, so locking in a historically low rate (Jumbo rates are currently less than conventional right now!) still makes good sense to me. With interest rates remaining low, demand remaining high, low unemployment, increasing incomes, strong consumer confidence and the affordability of Big Bear real estate, I expect 2016 to be a good year for real estate market in Big Bear.

We will keep an eye on the Big Bear real estate market and keep you posted on developments going forward – It is always interesting to see what the future holds, so stay tuned for more information. And in the meantime, if you would like to know the specific market value of your Big Bear property, or if you are interested in finding and buying a great mountain home, I am certain you will find our understanding of Big Bear’s unique resort market, our insight into the different areas of Big Bear and our knowledge of the local inventory very beneficial. We look forward to hearing from you -- contact us anytime!