Hello and thanks for checking in with us on Big Bear’s unique, resort real estate market. The first quarter of 2017 is in the books, so let’s take a look at what has transpired in Q1 of 2017.

The Big Bear real estate market started strong in 2017 as the 86 residential closings we saw this January were the most sold in the month of January in over 10 years. But now that the ski season has passed, the market has slowed a bit. Tax time is notoriously slow in Big Bear, but that too shall pass.

The total number of residential sales in the first quarter of 2017 (vs. the same period in 2016) increased 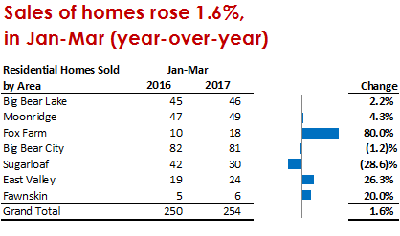 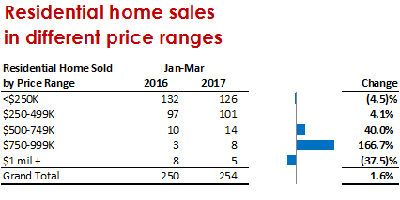 While the bulk of the sales remain under $500,000, it is encouraging to see the growing demand for higher priced properties as well.  These charts show first quarter sales in different areas and also in different price ranges.

Demand for homes in Big Bear overall has been healthy. In fact, the pace of new listings coming to market has not been able to keep up, as we currently have only 365 active listings on our Big Bear MLS and 162 homes currently in-escrow. Which, based on a typical 45-day closing period, equates to only 3.4 months of supply (a.k.a. seller’s market).  That said, late spring and early summer is typically a time where we expect to see a lot more inventory coming to market. It will be interesting to see if the demand in the market will continue to absorb it or if, more likely, we will see the number of active listings climb towards the 500 mark by mid-July. Based on what the first quarter of 2017 has shown us, I do expect this summer to be solid season for sales here in Big Bear.

The average price of all residential homes in Big Bear sol 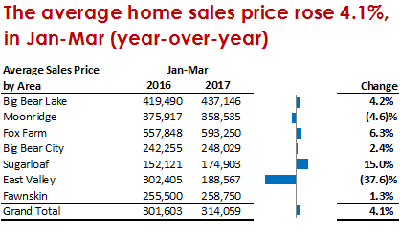 d in the first quarter of 2017 (vs. Q1 2016) showed a substantial increase of 4.1% ($314,059 in 2017 vs. $301,603 in 2016) - An impressive start to the year indeed. And although, as mentioned above, the number of sales in Sugarloaf decreased 28.6%, the average price paid there increased 15%. When the number of sales suddenly declines after an extended period of substantial price appreciation, this often indicates that we may be approaching a ceiling.

Let me know if you have been considering selling, or if you would simply like to know what your property is currently worth.  Listing in early spring does provide the opportunity to stand out, as there is not too much competition on the market to deal with (yet). If you have any questions on the market or regarding any properties you see for sale here in Big Bear, do let us know.  We look forward to hearing from you. Until next time, all the best!